Alot of this year has been about photographing various protests and demonstrations, especially the English Defence League, and associated organisations ( 16 different events with the EDL). Most latterly this has been dominated by the 3 student fees protests that I attended which resulted in some violent, but exciting, encounters.The year has also seen 2 very memorable trips to Armenia and Nagorno-Karabagh; justice cannot be done to these journeys in this brief review. To balance off the more serious side of this year, this review includes a number of other photo-opportunities which has illustrated the more entertaining side of life in the UK.

Father and daughter get caught up in the confrontation between the EDL and Police in Stoke town centre. One of the most violent EDL events this year. 23 January 2010. 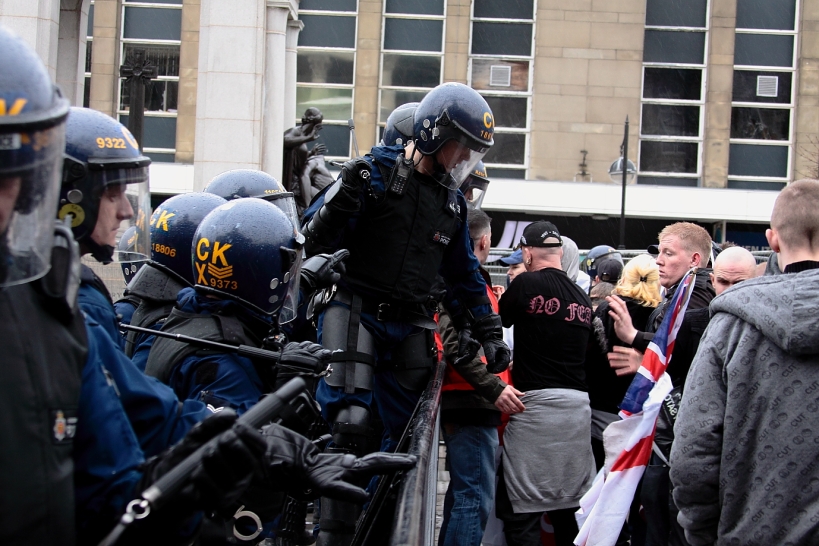 Towards the end of the EDL demonstration in Bolton the riot Police decide to become aggressive with the protestors. Dogs and batons were used freely - the next 10 minutes were something of an adrenalin rush! 20 March 2010

Thousands of pensioners rallied in Trafalgar Sq against the expected cuts in welfare service and public sector jobs. This old lady, activist, was buying a badge calling for us to "Smash the IMF". You are never too old. 10 April 2010

On Tower Bridge watching the London Marathon. Virgin? and who's pointing? 25 April 2010 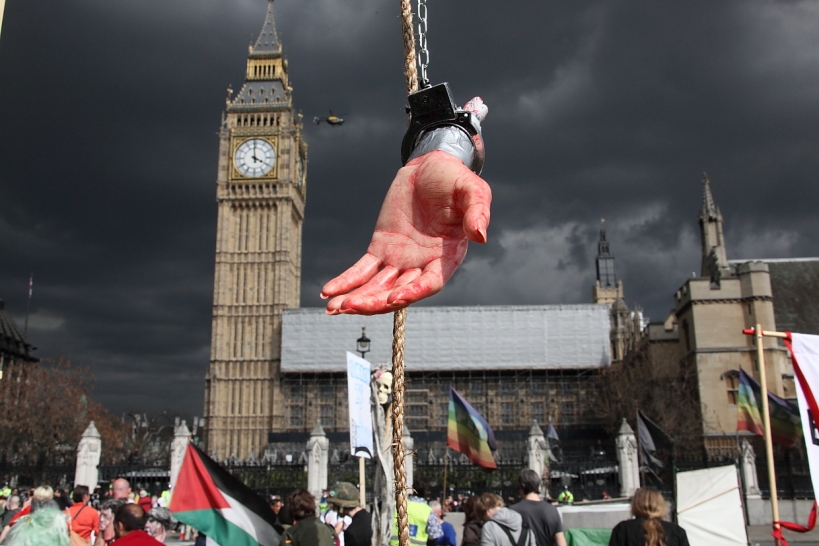 Days before the General Election, the May Day "Power to the People's Assembly rallied outside Parliament, which involved the hanging of Gordon Brown. 1 May 2010

Spectacular view from the Cascades in Yerevan, Armenia with Mt Ararat in the background. 8 May 2010

The Democracy Village was set up in Parliament Sq during the May Day event - some of the area was used for gardening activities. 15 May 2010

One of the float girls blows glitter into the crowd at the Pride London event. 3 July 2010

The aftermath of the escape by a number of the EDL through the flimsy barriers erected in Dudley to contain their protest. 17 July 2010

Together. An exciting day out in Blackpool 14 August 2010

A theatrical encounter during the Notting Hill Carnival. 30 August 2010

The London Mayor's Skyride was for all types of people to join in - whatever speed. 5 September 2010 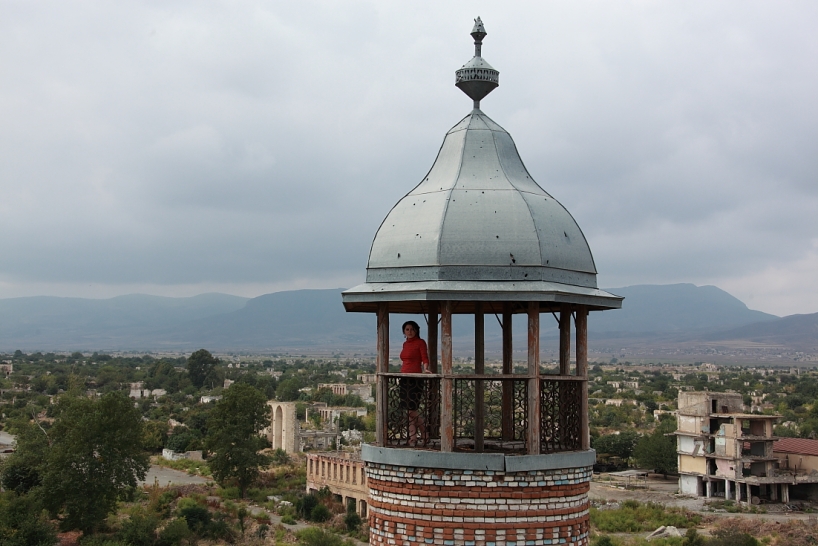 View of the devastated city of Aghdam in Nagorno-Karabagh from the surviving mosque. Completely destroyed in July 1993 by the Armenian army, resulting in the displacement of over 300,000 people. I was privileged to get access, as foreigners are normally banned from visiting and taking photographs. This represents a buffer zone in the continuing "conflict" between Nagorno-Karabagh and Azerbaijan. Unfortunately soldiers continued to be killed in sporadic outbursts. 23 September 2010 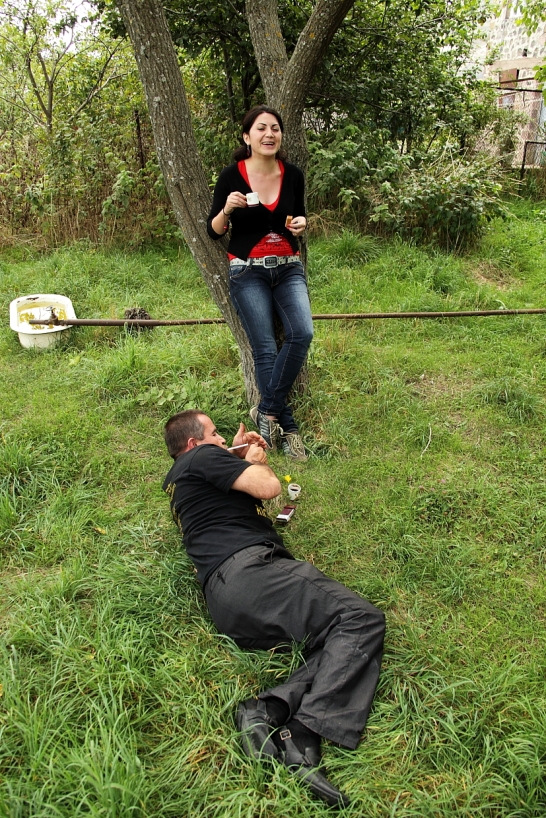 Some rest and relaxation in Shinuhayr, Armenia for Gayane, and Rasmic, my translator, guide, driver and companions on a 7 day road trip through Armenia and Nagorno-Karabagh - fond memories. 24 September 2010

A small group of activists were hemmed in by the Police and searched during the Right to Work protest in Birmingham. 3 October 2010

The "Crude Awakening" direct action event at Coryton Oil Refinery which managed to blockade the exit and therefore distribution of a days load of petrol to the manage companies. 16 October 2010

On the day of the Coalition's Comprehensive Spending Review which announced significant cuts to public spending, Bob Crow speaks to a rally in Whitehall - there is mention of a General Strike 20 October 2010 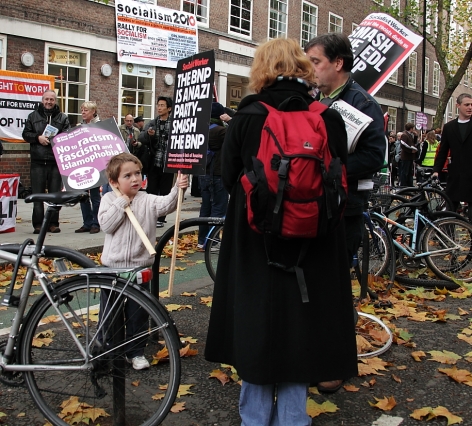 A family grouping gather their placards together as they embark on the demonstration against racism, and fascism. 6 November 2010 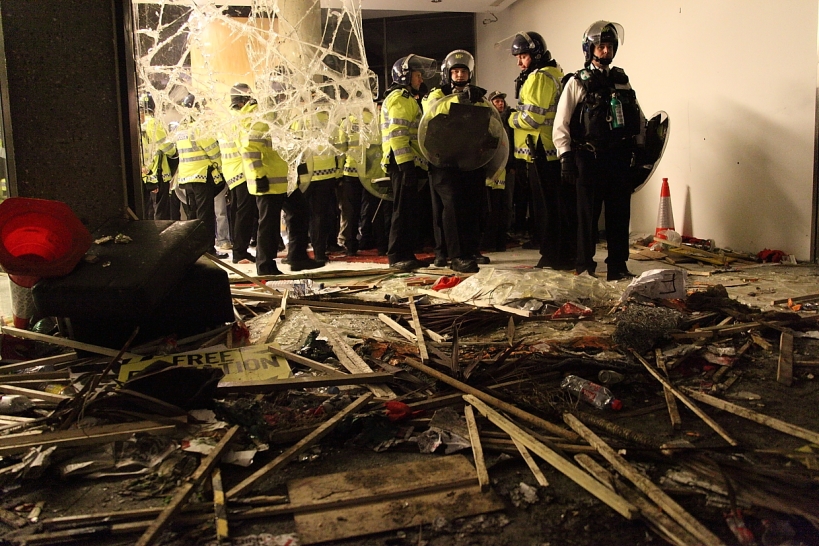 The reception area in Millbank Tower ( Tory Party HQ - amongst other organisations) following the student protests over the increase in tuition fees. 10 November 2010 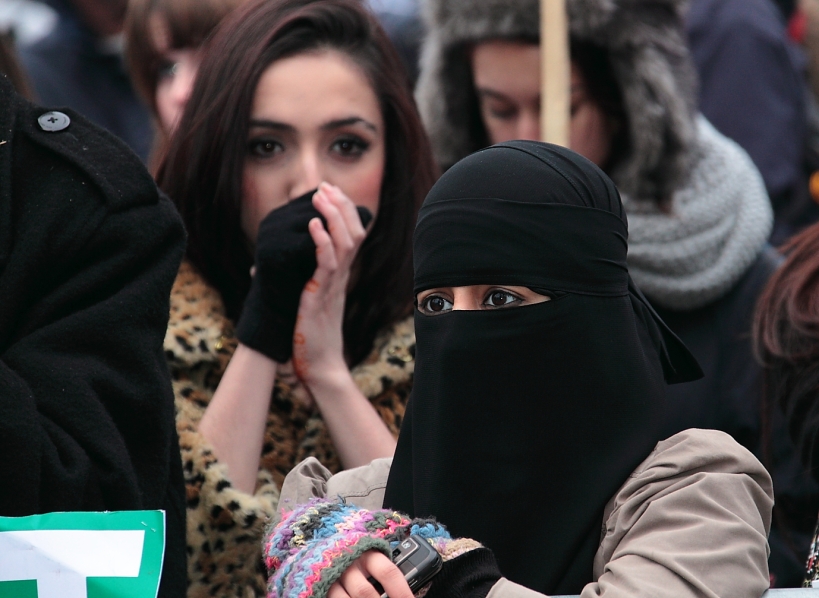 Attendees at the Stop the War in Afghanistan rally in Trafalgar Sq - the expressions and eyes speak for themselves. 20 November 2010

As the sun went down at the 2nd student demonstration, the bus shelter in Whitehall became the focal point for vandalism and a warming fire. By the end of the day, it was completely destroyed. 24 November 2010

Member of the EDL gets arrested in Preston under the watchful eye of a mounted Policeman. 27 November 2010.