The flame of student protest extinguished by light police touch

Following the 4 major protests in November and December last year in the lead up the vote in the House of Commons, a further 2 were organised for London and Manchester. This was always going to be a high risk strategy as splitting the numbers was in danger of diluting the impact. The National Union of Students (NUS), fronted by Aaron Porter seemed to support the Manchester event, which was inevitably going to be the least high profile.

The demonstration started, once again outside of the University of London Union, with a relatively significant turnout.A couple of women decided to go topless in the harsh winter weather, as “Sluts against Cuts” – close by was the ubiquitous Chris Knight who was the pantomime villain. His quips about there being a “nip in the air” whilst the women were shivering, was a bit Andy Gray-lite. The groups of masked, and hooded Black Bloc gathered in the main crowd valiantly attempting to look menacing, but effectively were the other part of the pantomime villain act…the “evil” Knight and his troops?

It was most noticeable that the heavy police prescence of previous protests was not in evidence, and it was almost eerie with their absence. As the crowd proceeded through central London, it almost looked “lost”; there didn’t appear to be leadership as it found its way past Trafalgar Square, and down Whitehall. The passage past the Houses of Parliament was only punctuated by a few flares, and a bit of smoke. There was high expectation of some trouble – the police remained aloof, the protestors had no barrier to fight against.

Part way along Millbank, there was a short-lived sit-down protest with a speech from one of the students. The police allowed the demonstration to proceed along Millbank to Tory Party HQ, the scene of the 1st event. Given this “breakthrough” and with the limited police prescence, there was a feeling that we could be re-visiting history with another attack. The police closed ranks across the entrance to the forecourt, and after about 15 minutes the conflict subsided; the students seemed not to have the will, or drive to push through. The majority of the people carried along Millbank – from this point the whole occasion descended into an aimless wandering.

Bizarrely, the dwindling numbers made their way past Victoria to the Egyptian embassy in some sort of virtual solidarity with the Egyptian people; whose plight is a little more serious than a handful of kids with a loan for their tuition fees. After much standing around and setting alight to a few placards, the march formed up to go to Oxford Street. From this point on groups started dispersing, and walked randomly through the streets. The self-styled activists who, armed with a few bangers, and matches, couldn’t muster up much enthusiam to do anything consequential. They were vastly outnumbered by the shoppers and were a passing irrelevant piece of light entertainment, and in some cases, temporary annoyance.

One would have hoped that students may have been more savvy to the way that a group can make a point. If you don’t seize the moment, and stike hard, and sustained, then the impetus disappears. The 6 week gap from the last protest, has eroded its impact and relevance to the wider population, and, in reality to themselves. This was all very limp, and pointless. Some students thought they had had a good day, by walking miles with no real purpose. A protest without publicity, carries little value, and a protest without leadership is likely to end up being a “nice day out”.

The police, consciously or otherwise, avoided any trouble by not creating conflict. The time was probably right for this to work, it clearly failed on the original Millbank Tower day in November. 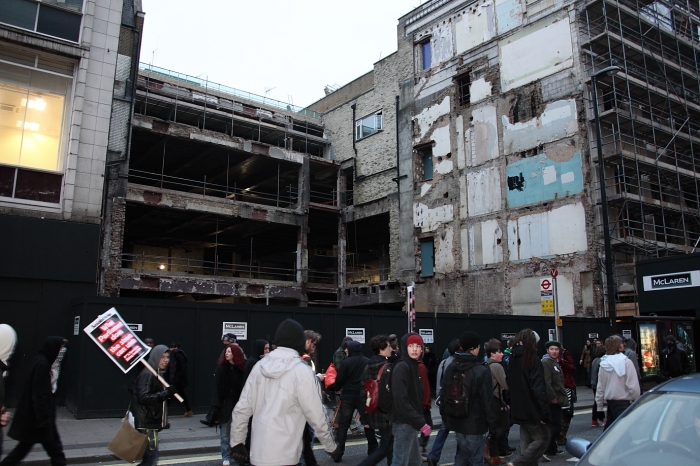 The students will need to re-invent their cause, and decide what it is now. If they have any sense they will form closer ties with the other Trade Unions and become part of a wider effort against the Coalition’s policies. This affects more people and will strike more of a chord in the wider consciousness – as a group on their own – the flame has withered, and flickering away.

More photos from the student protest in London