My annual pilgrimage to the Autosport Exhibition at the NEC in Birmingham is an ever changing event and is a source of great fascination. Many years ago I would have gone as a great fanatic of grand prix racing and all of the paraphenalia that goes along with it. As time has moved on, whilst the event hasn’t fundamentally changed – I have. The first event I went to, after having acquired my first digital camera a few years ago, was this very exhibition, so it is interesting to return as a slightly more seasoned photographer, and approach it as an observer.

The exhibition extends from the glamorous content, being the latest Formula 1 cars through the mountains of collectables and memorabilia, to hardware, and engine components. As with most exhibitions it is a thinly veiled exploitation of the attendees.

Apart from those that actually participate, which are in the minority at this event, motorsport represents a completely unobtainable lifestyle, with cars and stars that the fans can only fantasise about, obtaining speeds that are far beyond any equipment they will ever have. This pre-occupation with a fantasy world draws people in to an engagement which, on reflection is borderline obsessive, and possessive.

The club, a true football fan supports, is the one in their home location – you cannot chose it, it is one’s legacy. A motorsport fan does not have that attachment with a team, yet they seem to develop a fantasy relationship with the success of an outfit, which provides a reflected glory, but no right of association. Is this a way of obtaining kudos, and self-esteem through the back-door? Fortunately the fan falls for all of the merchandising and will wear with pride as though, somehow, they are part of it….someone needs to tell them that they are not – they are a walking, unpaid, advertising hoarding.

The glamour of motorsport, and cars brings with it – the girls. The days of the 70’s are still with us when a slim, pretty, busty, young girl occuping an exhibition stand is the honey-pot for the geekish, awkward motorsport fan. The lads egg each other on to walk up and get themselves photographed next to an unobtainable girl, and use the small amount of time with their arms around the ever-patient model as a memory for future stimulation. The true loner geek will come along with their long lens, or hover in the background and ride on the back of someone else’s bravery to capture a shot for later examination. In amongst all of this the girls are planting their advertising seed with thousands of pictures of their brand emblazoned breasts, and the ritual handing over to the besotted petrolhead of the plastic bag of goodies. 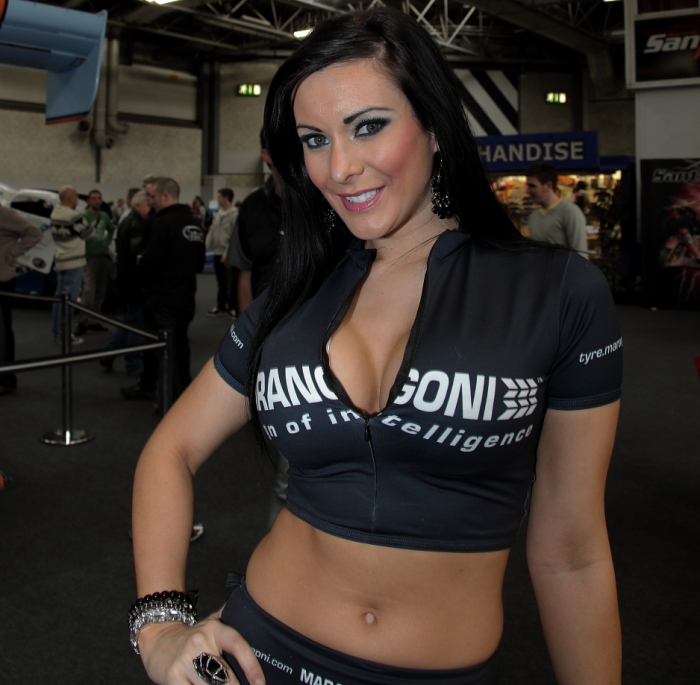 Ultimately this is an onanistic exhibition to seduce and tempt the poor, unguarded visitor with glimpses of their fantasy cars, speeding at gonad tingling speeds, surrounded by girls that they only experience in their wet dreams.

More photos of the Autosport Exhibition of Geeks, Girls and Grand Prix