In a previous article, “Artsakh Peace and Recognition : the future is not in the past” I made reference to the speed with which the independence of Kosovo was recognised. This was in the context of a situation in 1999 where the perceived aggressor was clearly identified and where the NATO community had sided with Kosovo. Serbia had no negotiating position on the world stage, and was effectively a defeated country, on its knees, politically savaged. When it came to the wishes of Kosovo to be independent then most of the major countries quickly accepted this as a re-affirmation of their opposition to Serbia. Serbia was not influential, nor did it have natural resources nor was it in a geo-politically pivotal position.
The Artsakh position is the polar opposite to that in Kosovo where the major powers have significant strategic dependencies in the region. There are big oil and gas reserves in the Caspian Sea and in the ex-Soviet republics of Turkmenistan and Kazakhstan on its eastern borders. A significant proportion of European gas is currently dependent on Russian exports, the majority of which is transiting through Belarus, and the Ukraine, all of which represents a risk to the security and stability of Europe, especially as Russia is prone to switching off the gas supply when these countries default on payments 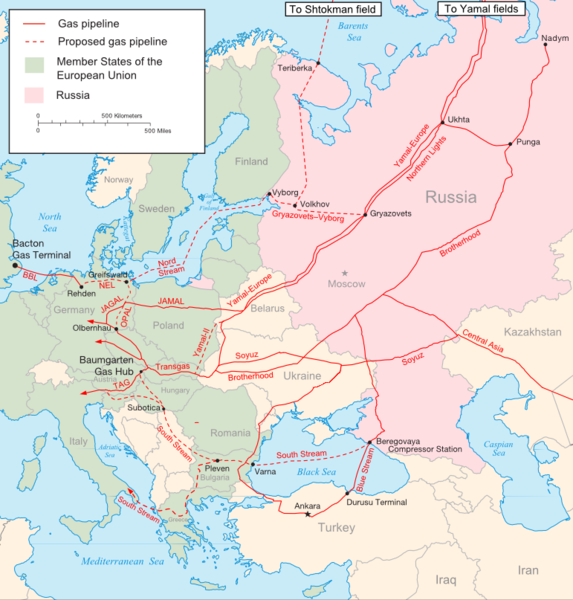 Germany agreed to proceed with the Nordstream pipeline which, by the end of 2012, will be fully operational and will provide a direct gas supply from Russia into Germany. This secures some old alliances, but also increases the dependency of Europe on Russian gas. This is the source of great concern. This dominance by Russia also gives them the opportunity to set prices and create some uncertainty in the economic situation. This level of reliance has become unacceptable and, with the backing of the USA, an alternative supply route is being pursued – the Nabucco pipeline.

Construction is planned to start in 2013, with completion in 2017, and will connect with the South Caucasus pipeline at Erzurum in Turkey. The Nabucco pipeline will then transit across Europe through to Austria. The sources of gas are expected to be from Iran, Iraq and Azerbaijan, however if the Trans-Caspian pipeline is agreed, then this will provide a plausible option for Turkmenistan ( through Turkmenbasy port) and Kazakhstan to export their gas without recourse to Russian pipelines. This option provides a realistic route to a substantial source of gas which, with oil becoming a scarce resource, will become increasingly critical to the world’s energy needs. Additional to the gas, there are large oil reserves in the Caspian Sea which are currently pumped through the Baku-Tbilisi-Ceyhan pipeline, to the Turkish sea port.

The validity of this strategy depends heavily on the co-operation of Azerbaijan and Turkey with the European and NATO countries. The inter-connections and alliances between different countries further complicates the whole situation. Turkey has become increasingly estranged from the US and EU countries. Turkey did not support the US during the Iraq war and recently France has proposed legislation to make denial of the Armenian Genocide by the Turks in the Ottoman Empire a criminal offence. Conversely, Turkey is presently under threat from Iran, in the event that the US and NATO forces attack Iran over its nuclear arms programme; NATO weapons are sited on Turkish territory.

Iran wanted to use its alliance with Armenia to lay a pipeline south to north in the Caucasus, however this was blocked by the Russian giant Gazprom. A small pipeline was allowed to supply Armenia, only, to mitigate any on-going blockade from Azerbaijan and Turkey. Russia continues to support Iran with technology to support its nuclear programme.

Russia has a proposal to build a “Southstream” pipeline which will go directly across the Black Sea into Bulgaria, by-passing Turkey, and then following the route of the Nabucco line. The export of gas is critical to Russia’s growth and defending its routes is paramount to its success, so the countries supporting the Nabucco, South Caucasus, Central Asia link may be considered to be antagonistic to Russia’s aspirations, and future wealth. Growth continues in Russia and therefore demand for gas increases however growth of gas production has not kept pace, so it is expected by 2020 all of Gazprom’s production will be required for the Russian market, with no gas for export. Gazprom has survived on the use of existing gas sources, and has never in its history brought on a brand new gas field.

In the next 10 years Russia will become more and more desperate to maintain its standing as an exporter of energy and the political power that this gives them, and the exploitation of new resources in the old Soviet bloc will become prime targets. Such a resource deficit will make Europe more vulnerable to shortages which means that the case for the Nabucco connection is more compelling.

Despite the individual cross-country politics, the European/NATO bloc need to work with Turkey and Azerbaijan to secure this alternative source, and avoid any unnecessary conflicts that may upset its progress. Armenia’s friends in the region are principally Russia and Iran, although more globally they will have support from France and the USA with their large Armenian populations. Buried in the centre of this is Artsakh and its small population seeking closure of a 20 year conflict. The international community has a number of choices – move one way and the war may re-start; move another way and the success of the alternative gas route may be delayed indefinitely, or re-routed; don’t move at all, and the “frozen conflict” remains “on ice” for longer. Unfortunately with this delicate balance of politics, and the increasing tension with Iran, the most likely course is that the main players will only take very small steps and accept that keeping the conflict frozen is the least risky option.

Categories: Artsakh in the World