Armenians in London remember the Genocide

Each year in London the Armenian community in the UK march through the capital to remember the 1,500,000 people killed during the Armenian Genocide in 1915. This march has taken place every year for the last 47 years, and the authorities allow the group to walk through the heart of London and commemorate, and hopefully educate about, this important event.

The Saturday afternoon shoppers look on, mostly with curiosity, wondering what is happening, and quite often, are slightly embarrassed when approached. After all, a discussion about a Genocide, is a serious subject when you’re intention was to buy a new pair of shoes from the most expensive shops in London. 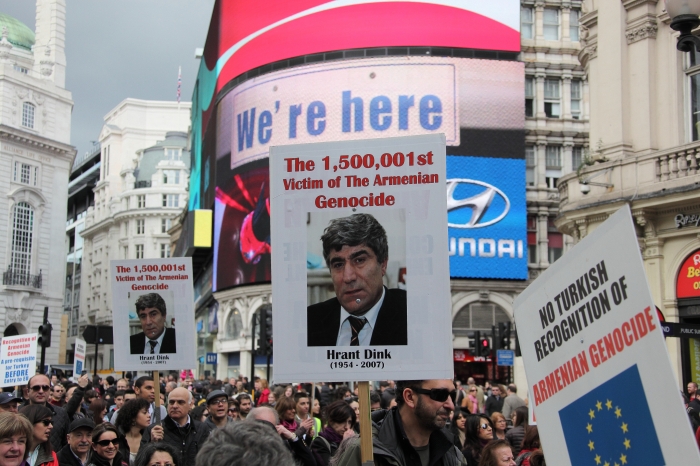 The idea that someone wanted to photograph this event was also a curiosity for the London Metropolitan Police. I was approached by the Commander of the unit responsible for controlling the event asking me why I was there, what my intentions were, and what I planned to do with the photographs. I told her that I was planning to put them into an article that was being published in Artsakh; I did point out that this was an unrecognised Armenian republic within the conventionally recognised borders of Azerbaijan, and was currently locked in a “frozen conflict” with its immediate neighbour. This 30 second school lesson convinced her that I was not a casual terrorist, or an anti-Armenian supporter looking to cause trouble. 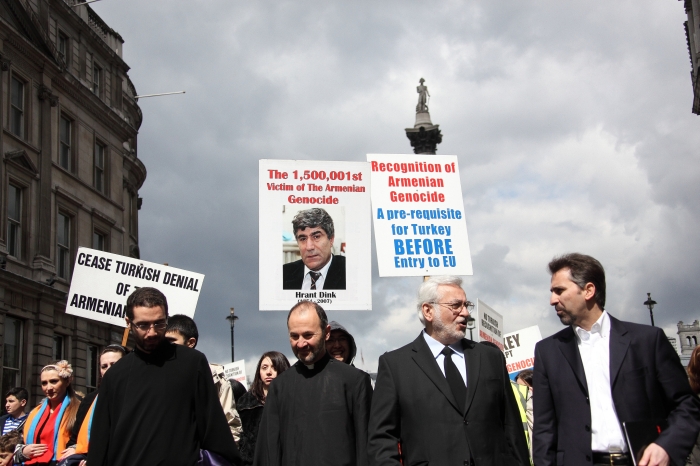 The march navigated its way through the major shopping district of London, past Trafalgar square ( an iconic area of London looked on by Admiral Nelson) and then onto Whitehall ( past the location of the UK Prime Minister’s residence). During this period the traffic was held up so the group could gather round the Cenotaph for the ceremonial placing of flowers. In London, the Cenotaph is the place where, on Remembrance Sunday in November each year, the Queen, the Royal Family, political dignitaries and veterans of war recognise the people killed in all conflicts over the last 100 years. Although the UK Government does not formally recognise the Armenian Genocide, the fact that that the Diaspora Armenians are allowed to place, and leave, wreaths at the Cenotaph shows respect for the event, and, arguably, some level of recognition; perhaps unwittingly at this point.

The people at the front of the march were carrying the 3 flags of the UK, Armenia and Artsakh as a symbol of solidarity and mutuality. The flying of Artsakh’s flag within the government district of London was symbolic, and I am sure that not many of the non-Armenian population would have appreciated the significance of this.

In one of the busiest and most populated places in the world this is Armenia’s day;  to hold their head up high and remind us all of their place in history, and the terrible things done to it in the name of racism and hate. For me also – as the flag of Artsakh was held high, and fluttered proudly in the Saturday sun, pointing out to the massed tourists in London, that it also existed and was worthy of some recognition – this was also Artsakh’s Day.

Like Loading...
‹ Maragha : Don’t forget the Missing, the Dead, and the Violated
An Englishman returns to Artsakh ›