Home › Reflections › An Englishman remembers the Liberation of Shushi

An Englishman remembers the Liberation of Shushi

My fifth visit to Artsakh was planned to coincide with the 20th Anniversary of the Liberation of Shushi, with the intention of becoming involved in events and witnessing the way that such an occasion was to be commemorated. My expectation was that the remembrance would be marked by solemn events, and a military parade – but this is Artsakh, and there was a surprise.

On my first visit to Shushi a few years ago, I remember being taken to the plateau at the top of Shushi, and looking down off the precipice into the canyon, and the story being recounted to me of the brave ascent up the cliff face. The innovation to enter the city by the most dangerous, and most unlikely route, spoke volumes about the determination of the soldiers involved, to liberate their city, and to finally end the relentless bombing of Stepanakert and the surrounding area. Back in England, where people were unaware of Artsakh, let alone Shushi, the terrifying photographs I was able to share of the sheer drop, and what took place over a few days in May 1992, gave some insight to a few people of the significance of that achievement.

I since discovered that the strategy was multi-faceted and that there were a number of approaches to Shushi to distract the Azerbaijani troops from the “back door” ascent. When I arrived on May 7th  this year, I was enthused by the idea that there were a number of people gathering at different locations around Shushi, to walk the same routes that the soldiers did 20 years ago.

In the group I was in, we were taken up the main road out of Stepanakert, and were given several briefings from Arkady Karpetyan (AGO) who was the Commander of this part of the operation 20 years ago. His “soldiers” for the day were perhaps a little less disciplined than for the original event, but the large group of people predominantly from the Artsakh youth community, wearing their bright orange T shirts, and supported by 1 Englishman and 4 Georgian Armenians, were prepared for the difficult terrain and the randomness of the weather.

The solemnity of the occasion was preserved for the formal events in future days, this was a wonderful opportunity for the youth of Artsakh to honour those people who achieved this initial stepping stone towards peace. Despite the muddy ground, and the rain, and the difficulty of the final climb to Shushi everyone made it to the main square.  The excitement of the significance of the event was marked by music, chanting and the ceremonial unfurling of the 3 separate components of the national flag. 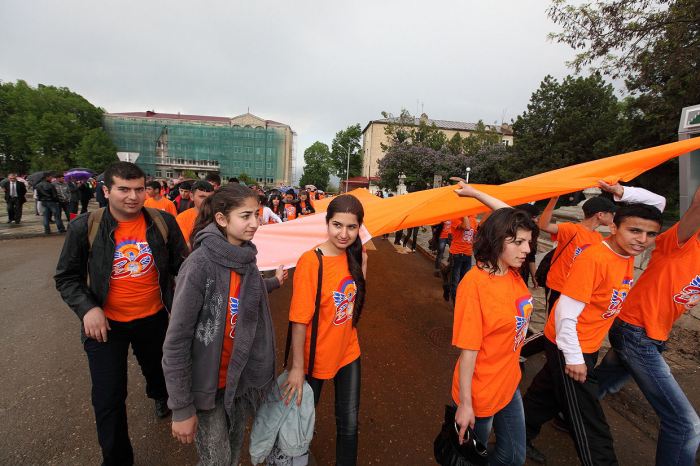 These 3 parts of the flag were carried up to the Church, surrounded by cries of “Artsakh! Artsakh!”.

In the Church it was inspiring to see the enlarged sea of the now ubiquitous orange T-shirts.

As with all events, one’s perspective will determine how one sees it, and concludes on it. Although I have been to Artsakh five times I try to maintain an objective stance on issues, and hope to remain unbiased despite having many personal connections. I have heard many stories of the unrelenting bombing by the Azerbaijanis of Stepanakert and the continuing fear that this caused to the population there, the trauma to children, the untold deaths to friends and loved ones, the blockading of provisions and resources, to everyone, which resulted in continual misery. The memories will last with people in many different ways, and the strength of spirit of the people of Artsakh, has ensured that life has risen from this terrible time. The need to liberate Shushi was a practical one, and is entirely understandable, and is nothing to do with aggressive territorial gain, and everything to do with self-preservation, defending the rights of people, and the wish to live peaceful in an established homeland.

The combination of the re-enactment of this important phase of the war, coupled with the vibrancy and hope that the youth brought to the occasion, as well, was an inspiring event to witness, and be part of.  The cries of “Artsakh! Artsakh!” could have been viewed as jingoistic nationalism, but I felt very much that it was due to positive pride in the significance of the occasion, the unity of the country and a continuing relief over how much was owed to those who secured this liberation. 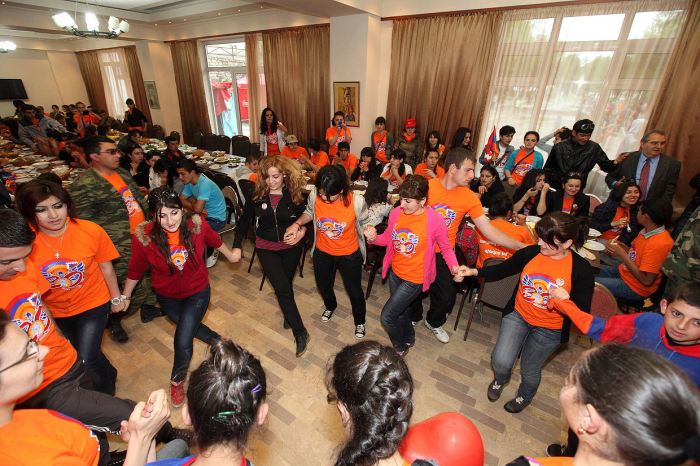 Whilst 60 million people in the UK will have been totally oblivious to these events, and the  importance that they held with the people of Artsakh, I am pleased that, at least, one of those 60 million was there to remember and witness this occasion.

The day was punctuated by rumbles of thunder like the distant bombing campaign of 20 years ago; a poignant reminder for those who lived through those miserable times prior to the Liberation.

Like Loading...
‹ 25 Voices from Artsakh are heard in London
Artsakh State University team are invited to the Russian-Armenian University Intellectual Games in Yerevan for the first time. ›