Home › Life and People Artsakh › Artsakh State University team are invited to the Russian-Armenian University Intellectual Games in Yerevan for the first time.

Artsakh State University team are invited to the Russian-Armenian University Intellectual Games in Yerevan for the first time.

For several years the Russian-Armenian University (RAU) in Yerevan has been holding “Intellectual Games” in Yerevan, comprising students from different institutions throughout the Republic of Armenia; these games are held in Russian. The Games promote fluency in the Russian language and test the students’ knowledge on a wide  range of Russian issues. It is an all day event, and involves a variety of quizzes , in different formats, which challenge the participants in their ability to work individually as well as a team.

Previously the Games had not included any representation from Artsakh. On behalf of Artsakh State University (ArSU), Susanna Petrossian, developed “working-together” opportunities with some of the institutions in Yerevan which resulted in a Summer School being hosted in Artsakh. Whilst Armenia does not formally recognise Artsakh as an independent republic, these connections are part of the de facto, practical recognition that does exist between the two countries. Although being a very slow process, this could be one of the small building blocks towards a wider acceptance of the state in a broader range of activities. Already, the qualifications issued by Artsakh State University are recognised in the global educational community under the Bologna agreement. 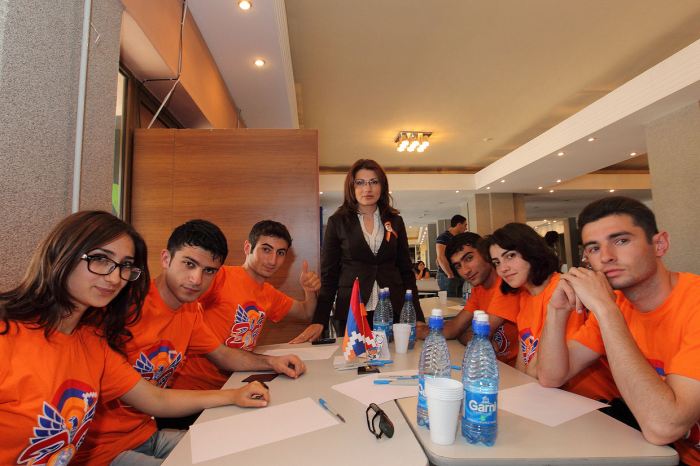 The “working together” that Susanna Petrossian initiated resulted in the first invitation being issued by the RAU in Yerevan, to these Games. The team of 6 students, called “Artsakh IQ” were wearing their “20th Anniversary of the Liberation of Shushi”, orange T-shirts from the event on May 7th this year.

The opening rounds were a series of team general knowledge questions with much intense consultation within the groups, determined to win.

Later in the day was an individual based round where students were pitched against each other, on detailed questions on Russian affairs. 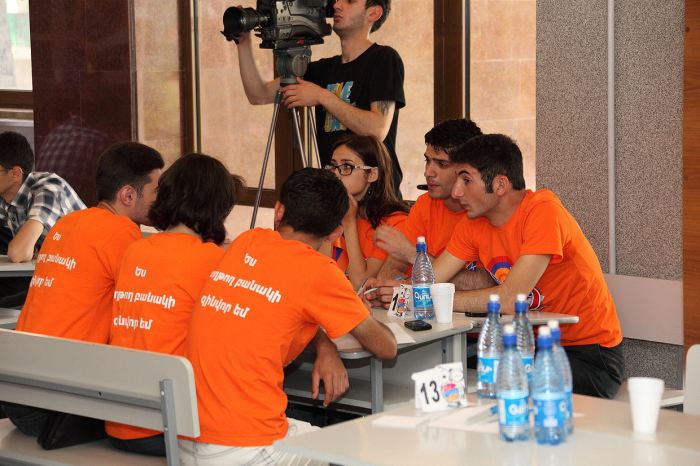 The Artsakh team represented themselves with a creditable 8th place. It was very pleasing to see that, as the certificates were issued, that the Armenian students were supportive by shouting “Artsakh! Artsakh!”.

At the end of the day, the Rector of the University, and previous Armenian Prime Minister Armen Darbinyan invited the Artsakh State University team to his office to formally welcome them into Armenia and into his University. 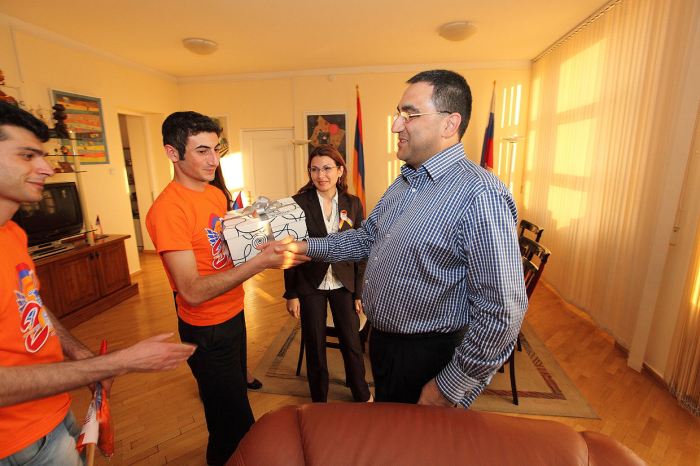 Susanna Petrossian presented him with a model of the “Tatik-Papik” monument, a symbol of Artsakh.

It was expected that the meeting would last a few minutes to exchange pleasantries, and formalities, however Armen Darbinyan entertained a varied conversation with the students, and Susanna Petrossian, for over an hour, and the opportunity was taken to discuss further developments in “working together” on a number of different fronts including student exchange programmes, and teacher training courses.

As the team left the Rector’s office, the sun was low in the sky, and it had been a long day, and there was the prospect of the journey back to Stepanakert the following day. Everyone was buoyant with the welcoming and positive conversation with the Rector, who had also proudly pointed out that his University was the only place outside of Artsakh to have played the Artsakh national anthem. 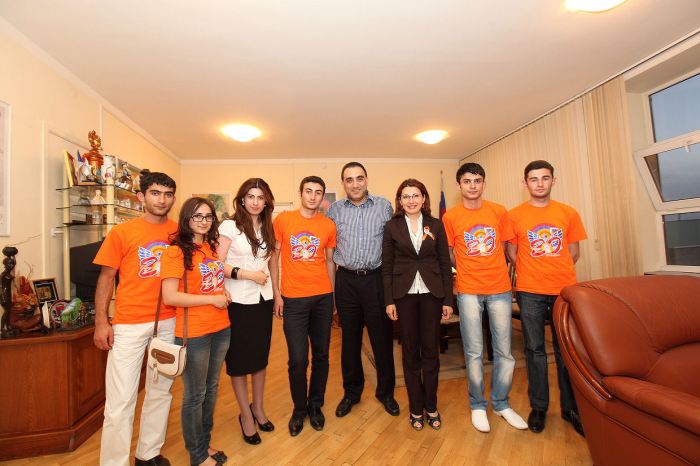 It was inspiring to see all of the students get excited with the right determination to win the competition, and the will to win is important for success. However for the Team from Artsakh, they may not have won the competition but they certainly succeeded on many other levels in a subtle and profound way.